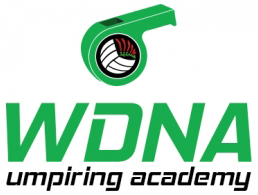 WDNA runs a very successful umpiring academy, consisting of a squad and a green shirt program. This allows umpires of all abilities from the very beginner to the highly experienced to continue to develop their skill set.

As the AUDO for WDNA I bring a wealth of netball experience as a player, coach and umpire.

Starting my netball career in the UK, I played for a local league where the requirement was if you played- you umpired. Not only did this help you understand the rules of the game and appreciate the technicalities of the sport but also helped instill a sense of respect for officials. Umpiring is certainly not as easy as some umpires make it look and it’s only by taking up the whistle that you can truly appreciate the role of the official.

I was lucky enough to spend a number of seasons playing for my County (Gloucestershire) where we traveled the UK playing other counties. After moving to Australia I started to umpire Socially until I had my three children, currently 11, 13 & 14. I found it really hard to get back into netball and started umpiring at a local indoor centre to regain my fitness and there I found my love of netball again. It was whilst playing socially that I was recruited to play for a WDNA club and from there decided to enquire about umpiring. I was accepted into the WDNA squad and subsequently identified for the State League Squad. In 2016 at the age of 35, I achieved my National A Badge. In 2019 I was awarded The Umpire Achievement Award by Netball WA for my work with the WDNA Umpiring Academy.

My Australian umpiring journey started when I was 30 years old, it’s never too late to pick up a whistle and I am an advocate for all players, coaches and spectators learning the art of officiating and developing the respect for officials.

My role as the Umpiring Development Officer for WDNA is to help develop all umpires whatever their current skill level. From the beginner to the seasoned umpire, WDNA run workshops, clinics and umpiring programs to suit your needs. My role also includes working with clubs to help educate members on the rules, offer opportunity for further development to those umpires not wishing to be a part of squad, BUT I cannot do this role without guidance from the clubs and their input on what services you need me to provide.

In 2021, the AUDO will continue to umpires to ALL games from Year 5 and above.

Squad is divided up into four definitive stages and it’s recommended that umpires make themselves aware of the differences to enable them to achieve the next goal. All members of squad are advised of the level they are entering at the start of the season, the movement between stages is very fluid and is there to help you achieve your goals. Each stage will have their own training sessions throughout the season with a focus on where they are currently at and what they are working on:

The focus in this stage is to umpire more consistently as a C Badged umpire, focusing on identifying infringements more consistently and in a timely manner. Umpires will also learn more about game management and where necessary introduce these principles to your umpiring.

This stage is for umpires who have a really solid understanding of the rules and are demonstrating this each week. The focus within this stage is to start looking off the ball, learning to read the play and start developing an understanding of contact and contest.  Improved knowledge of game management is required within this stage, recognizing when and how to apply it initially, followed by being confident to apply more consistently.

Allocation of games are generally lower than previously experienced for this stage due to the requirement of slower games to enable the skill of scanning and getting back to the ball before release to be achieved.

Umpires who have shown a consistent ability to look off, read play and position accordingly will be invited to this stage of the Academy.  Here the focus is to develop your scanning to include twelve players in your vision and allow this to dictate your positioning more consistently.

Umpires should aim to be consistent with Game Management and implement it appropriately, this works with the understanding of intent of players, allowing game management to be applied with confidence.

Further development of contact v contest is also required in this stage. Umpires will be selected from this stage to be put forward for their National B Badges.

This stage consists of umpires who have obtained a National B or A accreditation. The focus will be on consolidating their current accreditation and being further exposed to the National Umpiring Pathway.

Wristbands showing the stage of umpiring that you are involved in are provided and they MUST be worn each time you umpire, if you lose the band then you will be required to purchase another one for $2, you must produce the band when signing in.

Community Service is required to be completed by members of the Academy, those exempts include those in Year 11 and 12 only. The total number of hours required is 8, these can be completed as soon as you have been accepted into the Academy and you have received your Community Service document. You are required to keep track of your hours and have them signed off and presenting them to the AUDO upon request or at completion.

Community Service opportunities include: helping clubs with their grading by umpiring, assisting at Green Shirt Information Evenings with the distribution of uniforms etc., assisting at Workshops, learning how to Umpire Coach throughout the season, providing support on game days etc. The list is not exhaustive and we are happy to discuss individual needs, however, this is compulsory.

The Umpiring Academy hosts five specialised training sessions for the stage that you are you for the winter season. It is compulsory for ALL umpires to attend two of these workshops a year, though it’s highly recommended to attend all five.  The only umpires that are excluded from attending these sessions are those with the wANL program.

The Umpiring Academy will also have other workshops on offer throughout the season and these are at an additional cost.

Applicable fees are $150 for C Badged Umpires; $90 for B Badged Umpires and $0 for A Badged Umpires. These fees pay for the coaching that you are provided with each week, the additional training throughout the season plus uniforms. (2021 all umpires will receive a new uniform)

Umpiring uniform for Academy is as follows:

Your Umpiring Shirt always needs to be visible, if you are cold wear a white long sleeve shirt underneath. If it is raining you may wear a clear rain jacket or a white semi-transparent rain jacket.

Contact Rachel Williams on umpiring@wdna.net.au or call 08 9409 9950 if you wish to apply. Applications must be received by 26th March 2021. no late applications will be accepted except in exceptional circumstances.

The Green Shirt Umpiring Program is a practical umpiring course aimed at developing and training beginner umpires, of all ages, to ultimately attain their National Umpiring badge. Introduced to netball associations in 2007, the Green Shirt Umpiring Program has continued to grow, introducing an increasing number of individuals to umpiring and assisting to develop their umpiring.

Applications are OPEN for Winter 2021. Click here for more information

In 2021, umpire coaching will be a major focus for the Umpiring Academy, with all umpire coaches committing to upskilling and continuing to develop their skill set to enable us to provide the best training that we can. This program is open to umpire coaches who have umpire coached in the past – including club umpire coaches. If you wish to learn this skill then please look for the information on cadet coaching.

All umpire coaches are to wear WDNA clothing only when coaching. No other Association clothing can be worn, except for Netball WA clothing. WDNA has a range of jackets, body warmers and coats which can be purchased. Payment is made to umpire coaches based on their National Badge Accreditation and the number of years you have worked for WDNA.

At all times when coaching you must be wearing the high vis red vests to be noticeable to not only the umpires you are coaching but other match personnel who may wish to have a discussion with you.

In 2021, umpire cadet-coaching will receive an overhaul to ensure that we are upskilling umpires to be able to correctly identify areas of weakness and give appropriate coaching to umpires dependent on the skill level and stage of the academy that the umpires are within.

For those wishing to umpire Coach you must meet the following criteria:

Whilst cadetting you are required to wear WDNA clothing only. No other Association clothing can be worn, except for Netball WA clothing. WDNA has a range of jackets, body warmers and coats which can be purchased.

Cadet coaching is voluntary and if you are a member of the squad then this counts as all your community service hours for the season.

Applications are now open, to apply complete the form below and return to WDNA, once received you will be notified within ten working days (2weeks) whether your application was successful, subject to ratification by the WDNA Board. Applications close at COB on the 26th March 2021 and no late applications will be accepted except in exceptional circumstances.

Complete the form and send it through to umpiring@wdna.net.au or post to WDNA, PO Box 116 KINGSWAY WA 6065, for your application to be considered.

Check out our calendar of events.